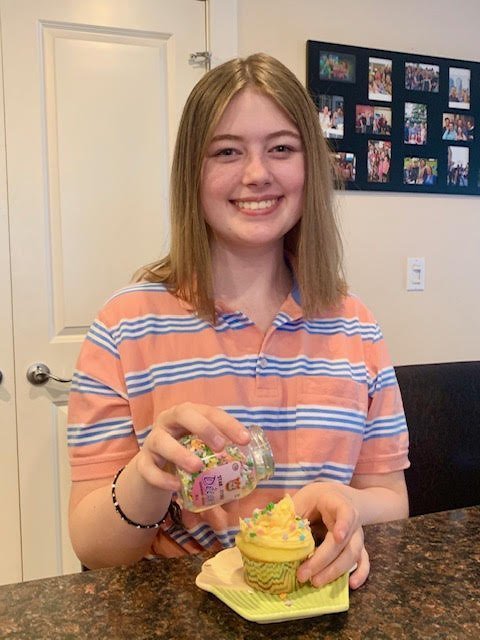 Calia Akehurst shows off a cupcake that she made for contactless pickup sales during COVID-19.

A young baker from North Delta has found a way to help less fortunate children in Kenya — even in the midst of a worldwide pandemic.

Calia Akehurst, 13, recently donated $1,300 to A Better World Canada after raising money through bake sales over the past year.

Since kindergarten, Akehurst has been fundraising for ABW, a central Alberta-based international development organization celebrating its 30th anniversary. She first saw that same interest from sister Jessana who fundraised with other students at Sunshine Hills Elementary, which collected more than $150,000 for ABW projects over eight years.

Akehurst was keen to help too and was passionate to do her best. Over a four-year period, she raised the most at Sunshine Hills, including in Grade 5 when she raised $1,400.

“For the past four years I tried to be the top fundraiser so I could feel accomplished for helping people,” she says.

Her mother Angela added it was “awesome to see” her youngest child be so zealous about fundraising while carrying on other interests such as skateboarding, drawing and especially writing.

Akehurst was moved to help after seeing photos of projects funded through her school and being inspired by ABW co-founder Eric Rajah’s passion as he spoke to students. Rajah received the Alberta Order of Excellence in 2011, the highest honour the Alberta government can bestow on a citizen.

Even after Sunshine Hills chose another charity to support this past year, Akehurst became committed even more.

It was a true labour of love. With the help of her mom, she typically baked 144 cupcakes for each sale. They also created sugar cookies shaped like fall leaves in celebration of autumn.

Her father John helped her set up outside to sell. They’d post a sign, pitch a tent with a chair, and display all of her sugar cookies and decorated cupcakes.

Other sales followed right through to June.

Prior to COVID-19, most purchases were made through friends and parents at bake sales in the Akehursts’ driveway.

When the coronavirus struck hard in mid-March, she changed her marketing plan. Sales were boosted through Facebook and, whenever possible, contactless pickup sales were done.

She sold about 17 dozen cupcakes and six dozen cinnamon buns during COVID lockdown.

“We’d spend all day making them. Sometimes I’d get bored and my mom would continue for a little bit and then I’d go back and help. So it took me and my mom one or two days to make the cupcakes (at one time). And then we iced them and that took a while.”

The cinnamon buns, made from scratch and drizzled with cream cheese icing, seemed to be customer favourites. During a fall fundraiser, Akehurst sold 26 dozen cinnamon buns.

“We set a price so people knew what to pay,” she says.

The $1,300 will go towards buying instruments for children with intellectual disabilities. Akehurst would “love to go one day” to Kenya and see the impact of her fundraising. The Grade 8 student already has career ambitions.

“It’s a dream of mine to be an author, but if that doesn’t work out… I’d really like to be a lawyer, like a human rights lawyer.”

And if it’s anything like her dedication to support children, she’ll achieve those dreams too.