Today our official work of data collection began. We drove with Beatrice to the Kipkerimwo Primary School where A Better World has built classrooms, new latrines, and a pump which provides access to clean water. We were welcomed by the school’s board of managers, teachers, and students whom we briefed on our purpose in collecting research data. 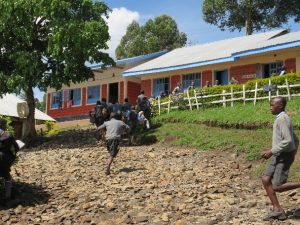 Kids running to their next class at Kipkerimwo Primary.

Once the formalities were completed, Sean, Samuelle, and I were sent out in separate directions to meet with a sample of parents in their homes. Because many of the parents were more comfortable answering our prompts in Swahili or a local language, we needed to be accompanied by translators who would make sure our questions and the parents’ answers were relayed properly. The community around Kipkerimwo is based largely on subsistence agriculture and this means that the homes we would visit were often far from one another. 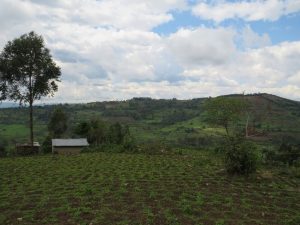 We spent the day crossing between fields such as this one, visiting parents in their homes.

Trekking from farm to farm, through forests, and up and down hills meant that there were a lot of adventures to be had along the way. In the end, tired and a little wet from the torrential rain, we had managed to survey roughly a fifth of the parent population – enough to meet our goal for the day. 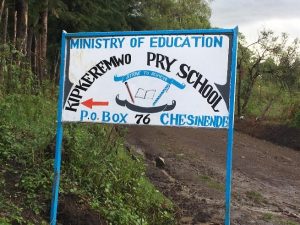 While we were out in the field, Dr Kiš held focus group discussions with teachers and board members to determine their perspectives on some of the same questions we were bringing to parents. Over supper, we debriefed on some of our early impressions from the initial surveys and discussed how we could make our surveys more effective. 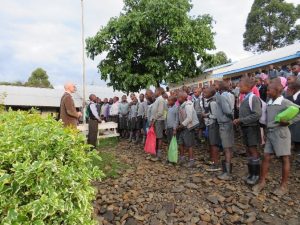 Tomorrow we will travel to a community where there has been no work done by A Better World for further data collection.