Having slept through the night despite the calls of the monkeys and hyraxes, we were up early to meet up with David, our guide to the area and a liaison of the Maasai people to the National Reserve. Before going out to conduct our interviews, we briefly stopped in at Sekenani Primary School to meet the principal, teachers, and Location Chief Moses. The students presented a song which they are planning to perform in a regional competition tomorrow.

When the assembly concluded, we travelled with David to his village or manyatta where we were greeted by the young warriors of the community. I was expected to participate in a jumping contest with the young warriors on behalf of our group and while I could not jump nearly as high as the chief’s son, David assured me that I had performed admirably. After a brief tour of the manyatta, we began our interviews with the mothers in the area. 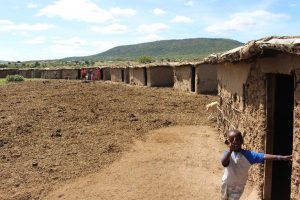 David’s manyatta where we began our work. 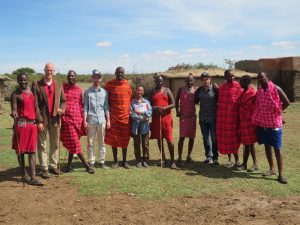 The young warriors of David’s manyatta greeted us upon our arrival with a dance and jumping contest.

We visited two more manyattas before returning to the hotel for the evening. Tomorrow we will visit another community west of Sekenani where A Better World has not intervened.