We spent the day travelling from the Fairmont to our next stop in the Maasai Mara National Reserve. There we will be staying at the Sarova Mara Game Camp which will serve as our hub while we visit Maasai communities in the area for further evaluations.

On the way we made a couple stops, first at the Loigero Primary School where we found that their well was fixed after being in a previous state of disrepair. 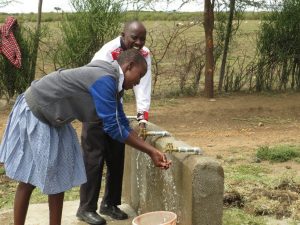 The well at Loigero Primary is functioning very well, as we saw when we visited.

We stopped in briefly to say hello to those worshipping at the local church and then continued to the Talek Community Health Centre where Eric gave us a quick tour around the grounds. While we were there, a couple children were in waiting to see the doctor. 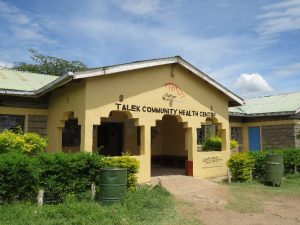 It was incredible to see the community that has sprung up around the Talek Community Health Centre.

We had a quick lunch in Talek before entering the National Reserve at Talek Gate. From there, we were driving alongside countless animals including elephants, buffalo, and even a big crocodile in the adjacent river. We ran into some trouble a couple kilometers from the hotel when Eric and Lawrence’s vehicle was having some trouble starting, but thanks to Peter and Lawrence’s know-how, we were on our way again a few minutes later.

When we arrived at the hotel, we met David who will be our guide to the area over the next couple days. David, a Maasai from a local village, debriefed us on all we should know about the Maasai culture and the vast differences between it and the culture we experienced in Kericho. We are looking forward to getting back to work tomorrow! 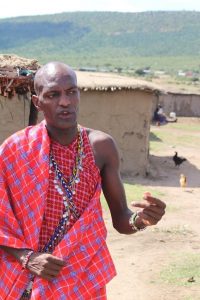 David, our guide in the Maasai Mara region.