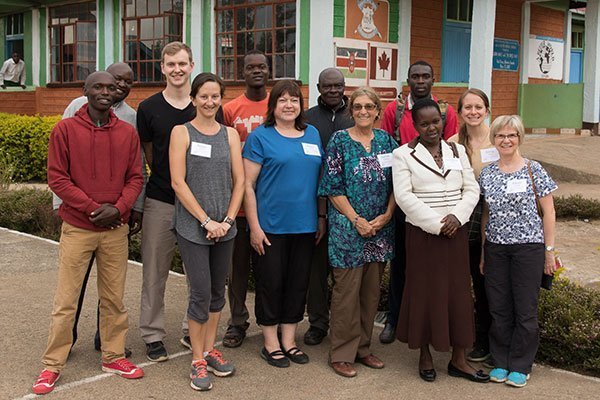 Through rehabilitation efforts, A Better World volunteers had the opportunity to greatly impact a number of lives during a recent trip to Kenya in February 2018.

Creating rehabilitation sustainability for people with disabilities was one of the trip’s main goals, according to rehab volunteer Loren Jacobs.

“We were always working with local professionals, teaching the children, parents and communities the importance of identifying and accepting physical disabilities,” said Loren, who also works as a Kinesiologist at the Central Alberta Pain and Rehabilitation Institute. “Early intervention is critical for the development of the child.”

During the team’s second day working at the Ndanai Small Home for the Physically Challenged in the Kericho region of Kenya, Loren and a local occupational therapist, Veronica, worked with a young boy who was developmentally delayed due to cerebral palsy.

While working with the boy, the two saw the child’s efforts to reach a toy the volunteers were dangling above him. 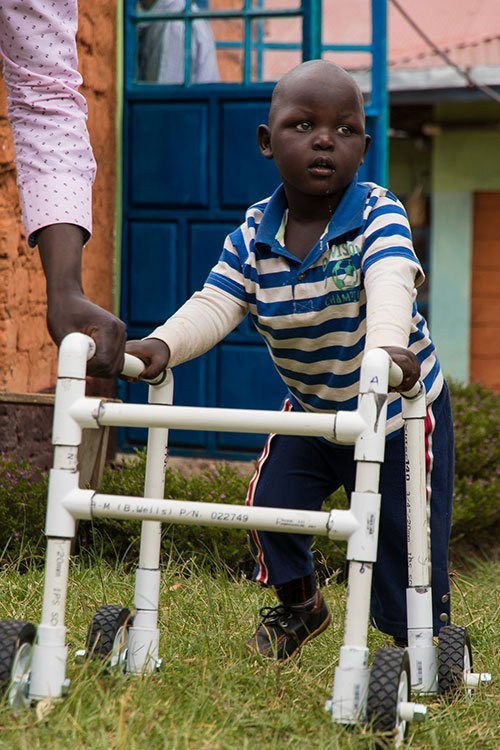 The two decided the boy was ready to stand on his own, so they found a chair for him to practice with, and with determination, the child was able to grab the chair’s slated back and pull himself into a standing position.

“He exceeded expectations by holding himself in a standing position for over one minute on his first try,” Loren said.

After the boy had adequate time to rest, they taught his mother how she could facilitate the exercise at home and had her practice with them.

“Having the ability to make a positive impact on another person’s life is incredibly rewarding,” said Loren, adding that everything the rehab team was able to accomplish was made possible because each volunteer played a crucial role in serving the disabled children and their families.

“Being able to leverage our knowledge and experience to help improve the lives of those in need is a true gift,” said Loren.

Photographer, writer, and physiotherapist Susan Czyzo was another rehab volunteer on the trip that had the opportunity to use her expertise in improving the life of another child at the Ndanai Small Home.

Along with Michael, an experienced local occupational therapist, Susan was able to meet with a boy whose right hand had been severely twisted, limiting functionality.

In an effort to see the range of mobility in the boy’s non-dominant hand, the two offered him a number of toys donated from Canada to play with.

“We had to try many times to keep him from using his preferred hand,” said Susan, who eventually gave the boy a wind-up toy car that she deemed as a promising therapeutic tool. “He didn’t like using his right hand [at first], but with repetition, he seemed to be enjoying playing with the toy using [that] hand.”

“The fact that we were able to get him using his less functional hand within a few minutes is definitely a success and shows potential for further improvement.”

Based on the advancements the therapists had seen, the two were able to prescribe the boy several exercises that he would be able to do from home to continue increasing the use of his right hand.

Due to his initiative and contribution to the rehabilitation team, volunteer George Ford was able to help a child walk for the first time. 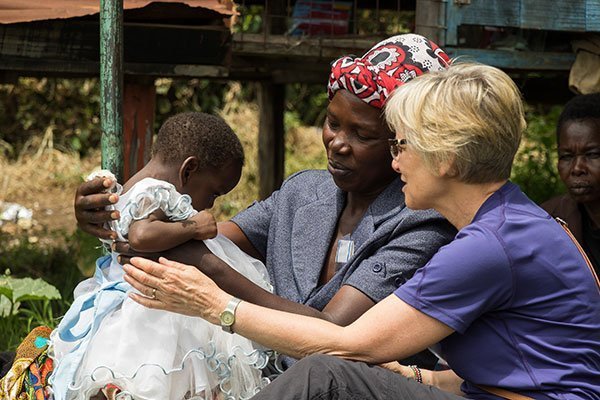 Prior to going on the trip where he was to review a water well drilling system, George was sent an e-mail with a photograph of a four wheeled walker that could be used by disabled children at the Ndanai Small Home.

“I was asked by Karen Leung, a leading contributor to A Better World Canada, if I could make another, similar to the one presented,” said George.

After speculating how he would replicate the walker, George took several trips to a local plumbing supply store and had enough piping, fittings, and glue to build the device.

He then cut the different sized piping and realized he could fit them inside of each other, allowing him to pack enough of the materials in his suitcase to make three of the walkers.

Once arriving in Kenya, George had a bit of downtime before he could begin on his main task. Since he had prepared the walker himself, he decided he would begin putting it together.

“While I was assembling the first walker, I kept hearing this kid crying outside the entire time,” said Geroge. After completing the construction of the first device, he was called by volunteers to see it being put to use for the first time.

It turned out that the child he had heard crying was a three-year-old who had never been able to walk before. Fortunately, with the aid of the walker, George was able to see the child take his first steps.

“It was an emotional charge,” George said, adding the memory still brings him to tears. “I’m going back to Kenya next year, and plan to give the rest of my years to help where I can with A Better World.”