Today presented a unique and fascinating opportunity. We drove many kilometers over rough dirt roads to a community school called Mosomborik Primary School. Mosomborik has not yet had any support from A Better World Canada and our data collection at Mosomborik would be used as a proxy comparison for Kipkerimwo prior to A Better World’s intervention. The student and parent populations at Kipkerimwo and Mosomborik are roughly the same size and the community was largely comprised of subsistence farmers, much like at Kipkerimwo. 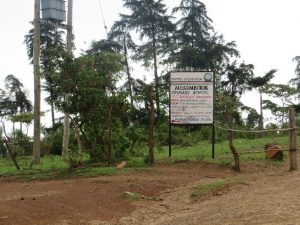 Mosomborik is an extremely remote school. The nearest alternative is 4km away.

What makes Mosomborik unique is its location on top of a high escarpment overlooking a narrow valley. One of the teachers informed us that the other nearest school is four kilometers away. Four kilometers may not sound very far to us, but the terrain surrounding Mosomborik is rugged and steep with high hills rising above narrow valleys. We found ourselves descending some of these dangerous slopes with our translators and guides, hoping to reach some of the families living on the side of the escarpment. 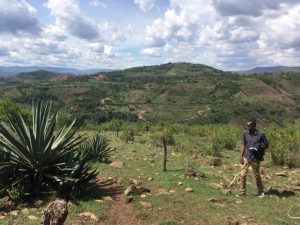 My translator Gilbert helped me to navigate the valley and has provided keen insight into the customs of the people we meet.

We met many parents of students at Mosomborik Primary as we wandered throughout the day, many of whom shared their concerns about the condition of the school’s facilities. Many noted the long and hazardous journeys their children have to make to collect water from the river at the bottom of the valley. Having navigated the treacherous escarpment ourselves, Sean and I can attest to the dangers involved with making this trek. It took my team a full hour to descend a third of the way down the slope and two to find our way back up. 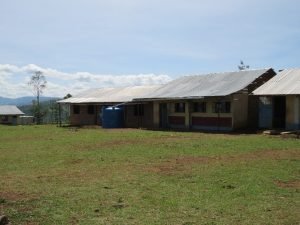 Mosomborik has many existing structures, but they are in poor condition, without doors or proper windows. When the rains come, they can get cold and wet very quickly. 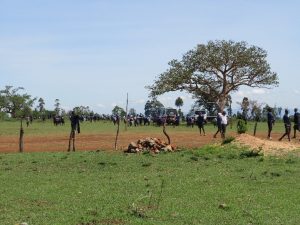 Mosomborik also has a large field where we found the students playing football, but it also serves as the students’ cafeteria. They gather daily for their meals under the tree pictured above.

At the end of a long day, we spent a little time with the students. I was told that some of the children, due to Mosomborik’s remote location, had never met foreigners of any kind. We were eager to meet them and, as it turned out, they too were excited to meet us.

We left back the way we had come, hoping to beat the rains which would likely make the roads inaccessible. Thanks to the skills of our driver, Peter, we made it back to our lodgings just as the rain began to fall. 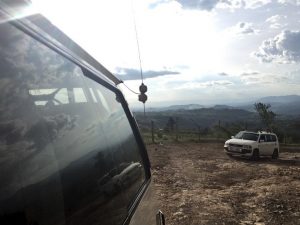 The roads leading to Mosomborik were the roughest I had ever ridden on. 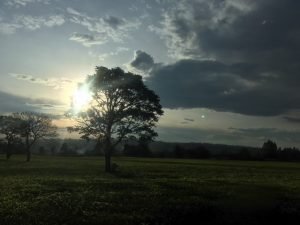 The sun beginning to lower over the vast tea fields that cover Kericho county, where we have been working.