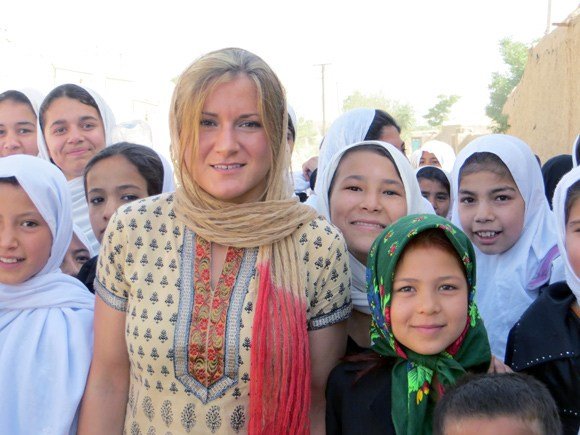 Children in rural Afghanistan have a new door open to them thanks to University of Alberta graduate student Azalea Lehndorff, whose work on the 100 Classrooms project has resulted in four new schools being built, with more than 8,000 students enrolled.

Along with Alberta-based organization A Better World, Lehndorff has been working since 2010 to improve education in Afghanistan — particularly for girls — and hopes to build another two schools in the near future.

Currently working on her Master’s degree at the School of Public Health, Lehndorff said it was her own struggles to attend school that inspired her to tackle the education system in Afghanistan.

“People always want to know, ‘Why are you so passionate about this?’ Well, that’s why. I really did have to fight for education, run away from home and all that,” she said.

“So when I saw that other people don’t have the opportunities, and they don’t have options like I did, then I really wanted to help.”

Lehndorff’s work started after she graduated from Canadian University College in Lacombe, Alberta. Accompanied by a classmate and two professors, Lehndorff travelled to Sheberghan in northern Afghanistan with the intent of eventually building 12 to 15 schools.

“We chose that area simply because we had been there previously, and they were very receptive to education,” Lehndorff said.

“The Minister of Education gave us a list of schools. He said, ‘The communities have requested for these schools,’ which is a great sign because it means that they’re initiating it.”

Lehndorff said despite constant warnings about safety risks and news of violence throughout the country, the Afghans she worked with were welcoming and eager to work alongside her on the schools.

“The Board was hesitant about allowing me to go to Afghanistan. As a student, just graduated, you know, it’s risky,” she said.

“But I’ve never felt threatened. I’ve travelled alone in the country, but honestly, it depends on where you go. And we always listen to the local people and make sure that we don’t go places that we know are sympathizing with the Taliban.”

Lehndorff noted although barriers to girls’ education in Afghanistan have been lifted slightly with the overthrow of Taliban rule, obstacles such as poverty, the need for children in the workforce and the continued tradition of arranged marriages are equally prohibitive.

“We also have heard from their perspective, ‘Why go to school if you’re going to be put into a marriage and have kids?’ And that’s kind of your life. You don’t need to have a career or anything else,” she said.

“Of course, we know that there are so many benefits for girls to go to school, even in the number of children they have, the maternal mortality, the ‘under five’ mortality of the children, (and) literacy.”

Yet the battle for education is a familiar one for Lehndorff, who described her own childhood education as “hit-and-miss,” after moving to 26 different homes by the time she was 13.

Lehndorff’s mother eventually pulled her and her sister out of the boarding school they were attending at the time in order to move to Tennessee.

However, Lehndorff — who had been contemplating a career in the medical field — knew that without a steady education, such a future would be impossible, and she was determined to find a way back.

“Basically, I grew up in a home where education wasn’t really valued,” she said.

“(Our mother) didn’t have dreams for us to be going on to high school or university. That wasn’t really her focus. So when we wanted to do that, it actually kind of went against what she wanted for us.”

Ultimately, with the help of family friends, Lehndorff and her sister scraped together enough money to escape back to the boarding school by sitting on the floor of a Greyhound bus.

“We thought if we could just get on the bus and get back there, then we’ll figure out the rest when we get there,” she said.

“So that’s what we did. We got back up to the school, and we worked really hard to get through, because it wasn’t cheap. People helped us as well, and I was able to graduate from that same school.”

Years later, Lehndorff says she doesn’t want to focus on the negative aspects of her past, but instead work on creating a new future for children facing similar barriers.

“I’m willing to do anything to spread the word,” she said. “I thought I had been so blessed to have been given so many opportunities that so many people don’t have. And that somehow I felt gratitude, like I wanted to pass it on in whatever way I could.”