Wednesday, May 1, 2019 – Restricted from traveling today

Our day started out with the news that we would be confined to our compound. We did not receive security clearance to travel to two of our schools so the Minister of Education asked that we remain in the compound. Six armed guards were posted at our site for the four of us staying here. The day turned out great as we have been wanting to interview students, teachers, and community leaders to see the difference education is making through our classroom project. 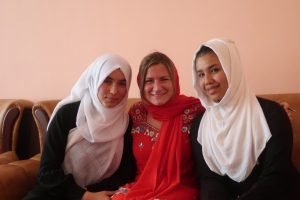 The community leader, parent representatives, and teachers also joined us for dialogue and interviews. 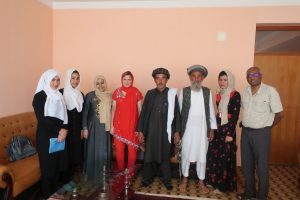 The second school group came from Quara Kent high school. We did much the same as with the first group. The two students that we interviewed had a clear path to what they wanted. One wants to be a midwife as too many are dying at birth and the other wants to be a lawyer to bring freedom to women.  It is good to see the community leaders wanting to see their girls in school and moving on to higher education. 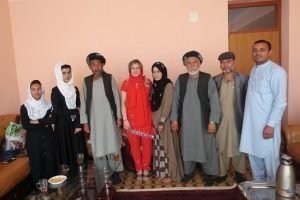 Since we were house-bound, the Minister of Education and his deputy came to see us as well.

We were reviewing our work and the future needs. They gave some stats. This year, 2463 girls and 3405 boys will graduate from high school in this province of Jawzjan. It is very humbling to note that A Better World is the only foreign organization that has consistently been building schools. The Minister (right of Azalea) is the deputy with whom we have worked for over ten years and next to him is Javid Noori, our project manager. 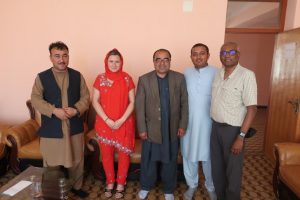 Today they deployed six armed guards for the four of us at this guest house: Azalea and I, our driver, and Javid. It was a bit worrisome but we learned in the evening that the governor’s bodyguard was killed so that’s why they wanted us in all day and protected. 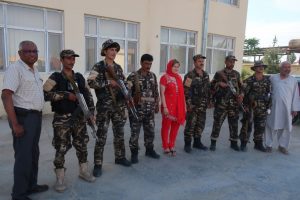 We all ended up playing some frisbee with the guards (thanks to Candi for sending the frisbees). They were constantly patrolling the compound, watching to be sure that no one had entered. We had a steady stream of visitors until 10 pm, all of them with gifts to say thank you. At 9 pm we were brought a vegetarian chick pea dumpling by the Minister of Engineering, so we ended up with a 2nd supper. In spite of the set back of school visits, we got our more in-depth dialogue completed. Those are hard to do at the schools. We will hopefully get clearance tomorrow to travel. The guards said they will come if need be. They are only here when we are here. They arrive an hour before we come and stay as long as we are here through the night.

Another image to leave with you: a clean glass of water is still hard to get for over a billion people in the world. These children are thankful for clean water. 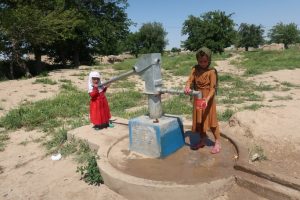